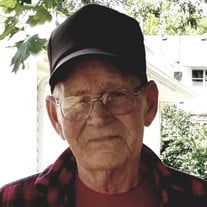 Adrian “Bud” Kurtz, 79, of Paxton, passed away on Sunday, October 13, 2019 at his home. He was born on April 9, 1940, the son of William and Letha (Milner) Kurtz. Bud married Aletha Ferguson, and they were married for 39 years. Bud retired from Henkel Corporation in Kankakee. He enjoyed fishing, playing golf and was a very handy man – always keeping busy and helping anyone in need. Bud and Aletha are members of Living Word Church in Roberts. He is survived by his wife Aletha Kurtz of Paxton; one son Darrell (Linda) Kurtz of Rantoul; five brothers Chuck Kurtz, Dean Kurtz, Jim (Pat) Kurtz, all of Mississippi, Harry (Nita) Kurtz of Iuka, IL, and John (Rosie) Kurtz of Kansas City, KS; two sisters Mary Thackery and Judy Hennessy, both of Mississippi; six grandchildren Shayna (Dustin) Johnson of Paxton, Dustin (Heidi) Kurtz of Paxton, Stephanie (Adam) Tully of Colorado, Adriana Kurtz of Rantoul, Roberta Weinmann of St. Joe, and Matthew Kurtz of Iowa; seven great-grandchildren Grace and Lily Johnson, Liam, Lincoln and Lidia Kurtz, and Rebecca and Eli Weinmann; and many nieces and nephews. Bud was preceded in death by his parents, one son James Kurtz, one brother Joe Kurtz and one sister Marge Middleton. The family would like to express their sincere gratitude to Wendy Graham for her compassion and care. Cremation rites have been accorded. A memorial visitation for Bud will be held on Saturday, October 26, 2019 from 1pm until the 2pm service at Living Word Church in Roberts. A private family inurnment will take place at a later date at Glen Cemetery in Paxton. Memorials may be made to the family's wishes.

The family of Adrian "Bud" Kurtz created this Life Tributes page to make it easy to share your memories.

Send flowers to the Kurtz family.