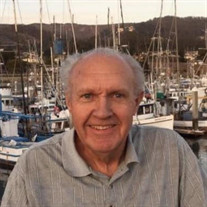 Arvil “Arvie” Coye Beard, Jr., loving husband, caring father, and dedicated grandfather passed away peacefully, surrounded by family, on June 10, 2021. He was born in Pittsburgh, California on February 2, 1949, to Clara Arleatha Dunn Beard and Arvil Coye Beard, Sr. After the death of his parents when he was seven, he and his sister went to live with their uncle and aunt, Floyd and Betty Gibbs, where they were raised with their three cousins. Arvie graduated from Pittsburgh Senior High School in 1967 and enlisted in the United States Air Force. This would begin his over 20-year career as an Air Force Material Manager before retiring as a Senior Master Sergeant in 1990. During his years of honorable service, Arvie received several honors including: Meritorious Service Medal, Air Force Commendation Medal, Distinguished Presidential Unit Citation, Air Force Outstanding Unit Award, Vietnam Service Metal, Air Force Overseas Short Tour Ribbon, Air Force Overseas Long Tour Ribbon, Small Arms Expert Marksmanship Ribbon, and the Republic of Vietnam Campaign Medal, among several others. During his Air Force career, he was stationed in California, Germany, Japan, and finally Chanute AFB in Rantoul, Illinois. Upon his retirement, he worked on the Chanute Base Closure Committee for two years and helped ensure a smooth transition from military to civil ownership of the base. In 1994, Arvie started working at Lincoln’s Challenge Academy in Rantoul, Illinois where he was the Budget and Logistics Director. He worked in this position until his retirement in 2014. He is survived by his wife of 35 years, Dale Beard of Loda, a son, Jeff Beard (Michelle) of Woodbridge, Virginia, two daughters, Wendy Beard D’Elia (Jay) of Roy, Utah, and Heather Rawlings Wilson (Mike) of Paxton. He is survived by one sister, Rhonda Gonsalves (Bob) of Concord, California, as well as numerous aunts, uncles, cousins, nieces, and nephews. One of his greatest joys was being “Papa” to his grandchildren, Miranda Beard Borhauer (Ansel), Alex Beard, Kayla D’Elia Gallegos (Garrett), Tyler D’Elia, Jonah Wilson (Sarah), Landon Wilson, Olivia Wilson, and Kate Wilson. He was preceded in death by his parents, Clara Arleatha Beard and Arvil Coye Beard, Sr. Arvie is remembered for his strong faith, his friendliness, his laugh, his patriotism, his ridiculously amazing organizational skills, and how much he loved his family and friends. He enjoyed playing golf and playing games in the yard with his family. He always loved the water whether it was surfing as a teenager in California or spending the day on the pontoon boat at Bayles Lake with family and friends. A memorial service will be held at Gibson City Bible Church on July 6, 2021, at 6:30 p.m. with a visitation held from 5:30 – 6:30 p.m. Pastor Jonah Wilson will officiate the service. A military burial will be held on July 7, 2021, at 1:30 p.m. at Abraham Lincoln National Cemetery in Elwood, Illinois. Memorials can be made to The Forgotten Initiative (https://theforgotteninitiative.org), an organization supporting the foster care community.

The family of Arvil Coye Beard Jr. created this Life Tributes page to make it easy to share your memories.

Send flowers to the Beard family.