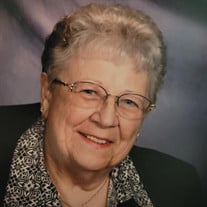 Beverly “Bev” Potts, age 82, of Paxton, passed away on Friday, March 25, 2022 at her home surrounded by family. She was born on October 22, 1939 in Rochelle, the daughter of Vernon and Ann Talbert. Mrs. Potts married Charles Earle and has two daughters who survive, Cindy (Tho) Lam of Champaign and Debra (Bill) Ebeling of Urbana. She married Delbert “Doug” Potts on December 15, 1979, and he survives. Also surviving are four grandchildren, Tina (Cory) Rolfe of Champaign, Charles (Sara) Lam of Garland, TX, Thomas Kapelanski of Urbana, and Dalton Wilson of Urbana; one great-grandson, Carter Rolfe; and one brother, Jerry (Sandy) Talbert of Houston, TX. She was preceded in death by her parents and one son-in-law, Tho Lam. Mrs. Potts grew up in East St. Louis and was a stay-at-home mother in her early years. Once her children were older, she worked at Chanute Air Force Base in Rantoul for 18 and a half years, working as a Supervisor in the Stock Room and Supervisor of the Jewelry Department at the Base Exchange. Following her retirement from Chanute Air Force Base, she then worked at Wal-Mart in the Women’s Clothing Department. Mrs. Potts had also been a Volunteer EMT and was a certified CPR instructor. Mrs. Potts was a member of the First United Methodist Church of Paxton, where she was active in various giving activities, including receptions and ushering, until her health declined in recent years. She was a Stephen minister and provided care and home visits to homebound members of the Church. Mrs. Potts was also a lifetime member of the VFW and the American Legion. Mrs. Potts loved her pets and cared deeply for animals. She enjoyed the peacefulness of camping, caring for her grandchildren, and playing games with her great-grandson, Carter. She also spent time quilting, crocheting, coloring in adult coloring books, and doing puzzles. A Graveside Service will be held on Monday, March 28, 2022 at 1:00 p.m., at Glen Cemetery in Paxton. Memorials may be made to the First United Methodist Church in Paxton.

The family of Beverly Potts created this Life Tributes page to make it easy to share your memories.

Send flowers to the Potts family.