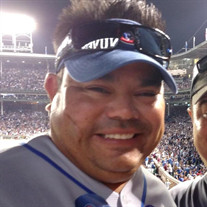 Brian “B” J. Norton, age 45, of Paxton, passed away on Saturday, February 5, 2022 at Carle Foundation Hospital in Urbana. He was born on August 9, 1976 in Danville, the son of John Richard and Donna Sue (Dreadfulwater) Norton. Brian is survived by his father, John Norton of Hoopeston; longtime girlfriend, Hannah Ritter, and her children, Landon Ritter and Devin Bradford, all of Paxton; one brother, Jeff Norton of Normal; and his best friends, Officer Jason Dunavan of Danville, and Ryan White of Los Gatos, CA. He was preceded in death by his mother, Donna; an uncle, Steve Johnson; and his maternal and paternal grandparents. Brian was a Deputy for the Ford County Sheriff’s Office since 2019. He started his Law Enforcement career in 2009 at Rossville Police Department. In 2011, he transferred to Paxton Police Department part-time; then in 2013 became a full-time patrol officer. Brian had also served the communities of Onarga and Gilman. He was a member of the Fraternal Order of Police and was a Cherokee Nation Citizen. Along with serving his community, Brian was an avid golfer, and enjoyed MMA fights, the Chicago Cubs, the Indianapolis Colts, and 80’s rock bands. He loved traveling to baseball games and going to concerts with his brother, Jeff, and enjoyed being with friends and family during summer cookouts. He will be deeply missed by all who knew and loved him. Cremation rites have been accorded. A memorial visitation will be held on Saturday, February 19, 2022 from 11:00am until the 2:00pm memorial service, at Cox-Knapp Funeral Home in Paxton (142 W. Patton St.). Memorials may be made to Gift of Hope or St. Jude Children’s Research Hospital. A benefit for Brian will be held on Sunday, February 27, 2022 from 2:00pm – 6:00pm, at 103 East Bar & Grill in Buckley (103 E. Lincoln St.).

The family of Brian J. Norton created this Life Tributes page to make it easy to share your memories.

Send flowers to the Norton family.