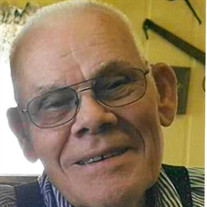 Carl “Fred” Aldrich, 84, of Paxton passed away on Monday, January 27, 2020 at Accolade Healthcare of Paxton Senior Living. He was born August 31, 1935 in Joliet, IL, the son of Homer and Bertie Ellen Tolliver Aldrich. Fred married Lavonne “Bonnie” Foley on July 1, 1960. She preceded him in death on April 19, 2012. Fred enjoyed restoring antique cars during his free time. He also enjoyed gardening and any activity that involved being outside. He was a collector of antiques and old memorabilia. Fred was always tinkering with clocks. He retired from Quanex Homeshield after 50 years of service with the business from Chatsworth that made windows and door parts. He will be remembered for always lending a helping hand to others. He is survived by one brother, John B. (Ruth) Aldrich of Rantoul; three sisters, Anna Marie McClary of Peoria, AZ, Mary Ellen (Roger) Moy of Bridgeport, AL, and Alma Joyce Kreig of Greenfield, WI. He is also survived by his mother in law, Garnett Foley, and sister in law Dorothy Foley Ruether. Fred is preceded in death by is parents, his wife Bonnie, three brothers, Ralph Howard Aldrich, Homer Garland Aldrich, and Charles Glen Aldrich; one sister, Virginia Mae Aldrich. Visitation will be held on Thursday, January 30, 2020 from 10:00 a.m. until the funeral service at 11:00 a.m. at Cox-Knapp Funeral Home in Paxton. Memorials may be made to Harbor Light Hospice of Illinois. Please sign his guestbook at www.coxknapp.com

The family of Carl "Fred" Aldrich created this Life Tributes page to make it easy to share your memories.

Carl “Fred” Aldrich, 84, of Paxton passed away on Monday, January...

Send flowers to the Aldrich family.