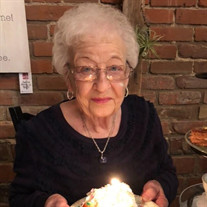 Doris I. Swank, 83, of Paxton, passed away on Monday, November 1, 2021 at her home. She was born on September 11, 1938 in Ludlow, the daughter of Paul and Floy (Fulton) Walters. Doris married David “Dave” Swank on October 29, 1975 in Urbana. Dave preceded her in death on March 7, 2016. She is survived by two daughters, Jackie (Paul) Albers and Patty Hammel; two sons, Jeff (Kim) Hammel and Randy Seibring, all of Paxton; one stepson, Rod (Sue) Swank of Texas; one brother, Ralph (June) Walters of Phoenix, AZ; eight grandchildren; and several great-grandchildren. Along with her husband, Doris was preceded in death by her parents; one son, Rodney R. Seibring; one brother, Paul Walters; and one sister, Linda Hall. “Our mother’s gentle smile and quick-wit brought joy and laughter to all who knew her.” Never able to pass up a good bargain, one of Doris’ greatest pleasures was going to garage sales and shopping. She never said “No” to going out to eat or shopping with family and friends. Doris also enjoyed her flowers – spending many hours watering and pruning them. Most of all, Doris loved being with her family and friends and spending time together. Her beloved rescue cats, Calli and Little Bit, gave her much comfort throughout the years. Doris will be greatly missed by all who knew and loved her. Cremation rites have been accorded. A graveside service will be held on Saturday, November 6, 2021 at 1:00 p.m., at Glen Cemetery in Paxton. Pastor David Parker will be officiating. Memorials may be made to the donor’s choice. Services have been entrusted to Cox-Knapp Funeral Home in Paxton.

The family of Doris I. Swank created this Life Tributes page to make it easy to share your memories.

Send flowers to the Swank family.