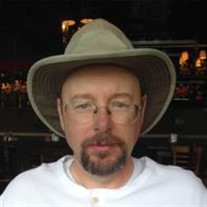 Gary Brooks, 62, of Bridgeview, IL passed away on Friday, September 4, 2020 at Advocate Christ Medical Center in Oak Lawn, IL. He was born on May 8, 1958 in Oak Park, IL the son of Vern and Dorothy (Jeschke) Brooks. Gary married Marilyn Sue Hoover on August 22, 1987 in Berwin, IL. She preceded him in death. Gary was a simple man. He enjoyed playing pool, bowling, and watching sports. He really enjoyed watching his grand kids sporting events and attending as many as he could. Gary was a member of New Spring Church in Bridgeview, IL. Gary also served in the Navy from 1975-1979. His favorite time of all was spending time with his family and grandchildren. He is survived by his father, Vern Brooks; one daughter Crystal (Richard) Sikoral of Hanahan, SC; three brothers, Jefferey Brooks of Chesapeake, VA, Robert Brooks of Burlington, IA, and Richard Franklin of Bridgeview; one sister, Pamela Brooks-Howell of Phoenix, AZ; two step-sisters, Melissa L. Summers of Charleston, WV and Leslie A. Meadows of SC; and 6 grandchildren, Makayla Honeycutt, Cassandra O’Hara, William O’Hara, Lexie O’Hara, Russell O’Hara Jr., and Nathan Brooks. He was preceded in death by his wife, his mother, and one son, Russell O’Hara Sr. Visitation will be held on Friday, September 11, 2020 from 2:00 PM to 3:30 PM at Cox-Knapp Funeral Home in Paxton. Funeral Services will follow the visitation at 3:30 PM at Cox-Knapp Funeral Home in Paxton. Memorials may be made to the family. Please sign his guestbook at www.coxknappfh.com

The family of Gary Brooks created this Life Tributes page to make it easy to share your memories.

Gary Brooks, 62, of Bridgeview, IL passed away on Friday, September...

Send flowers to the Brooks family.