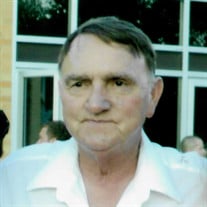 Gene R. Breeden Sr, 75, of Loda passed away on Sunday, January 17, 2021 at his home. He was born on June 18, 1945 in Watseka, IL the son of Donald and Florence (Roach) Breeden. Gene married Dawn Christensen on August 17, 2019 in Loda, IL. She survives. Gene started out working in the factory with Bradley Ropers and then eventually started working construction for Kenneth Hartman Construction Company. Gene stayed very busy as he was the proprietor of Breeden’s Repair fixing local farmers and friends machinery, trucks, and cars all around the Ashkum area. He was the owner of G & D Salvage in Loda for the last 38 years. The business was formally known as Breeden’s Wrecking, founded in 1944 by his grandfather William Breeden and Uncle Glenn Breeden. Gene also enjoyed Dirt Track Racing in his free time. He would visit Sugar Island, Kanakakee, Fairbury, and even the Danville Speedway where he drove the number F-1 for many years. Gene is survived by his wife, Dawn Breeden of Loda; two sons, Gene (Ronda) Breeden Jr. of Loda, Lewis (Sarah) Breeden of Forrest; one daughter, Tracy (Paul) Heideman of Ashkum; two sisters, Carole Harms of Ashkum, and Brenda Demierre of Kankakee; 3 step-daughters, Misty Cook, Elise Cook, and Tara Cook; twelve grandchildren, Tabitha Breeden, Michael Breeden, Heather Breeden, Holly Meredith, Steven Meredith, Dalton Breeden, Cullen Breeden, Emily Heideman, Heather Rawley, Henry Tester, Heiden Tester, Audriella Mikules; and several great grandchildren. He is preceded in death by his parents, and one brother, Donald Breeden Sr. Visitation will be on Thursday, January 21, 2021 from 4:00pm to 7:00pm at Cox-Knapp Funeral Home, Paxton. Funeral Services will be held on Friday, January 22, 2021 at 10:00am at Cox-Knapp Funeral Home, Paxton with Pastor Terry Cooper officiating. Burial will follow at Pine Ridge Cemetery in Loda. Memorials may be made to Iroquois Memorial Hospice. Please sign his guestbook at www.coxknapp.com Due to current COVID-19 guidelines, masks are required while in the funeral home, as well as safe social distancing practices. Please dress according to the weather, as waiting outside may be necessary. Thank you for your cooperation during this time.

The family of Gene R. Breeden Sr. created this Life Tributes page to make it easy to share your memories.

Send flowers to the Breeden family.