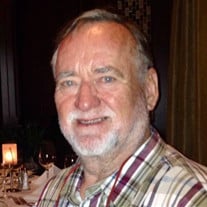 Gerald Wayne Hartman (GW) (Jerry), age 74, of Bayles Lake, Loda, IL passed peacefully surrounded by his family on Tuesday, April 5, 2022. He was born on March 9, 1948, in Paxton the son of Richard and Clarabelle (nee Haapala) Hartman. GW married Corinne (nee Lynn) Reynolds in 1970. He later married Lynne (Sunshine) (nee Lamar-Foltz) on September 29, 1989. GW was devoted to his beloved wife, Sunshine and loving father to Melissa, Mark, Doug, Keith and Natalie. He was a kind, caring and giving man. He proudly served in the Navy from 1966-1970 and the love for his country and the Navy never wavered and continued throughout his life. He was an accomplished sailor who won many regattas and loved the sailing communities where he made many lifelong cherished friendships. GW was a master builder and property owner who retired in 2014. He enjoyed woodworking, sailing, travel, golf, collecting coins and knives, playing cards and games, reading and doing puzzles. GW’s pride and joy was his family. He spent as much time as possible with family and friends on the water and off at Bayles Lake and all over the world. GW was a member of the Flying Scot Sailing Association and was very active in the group all over the United States. He is survived by his wife, Lynne (Sunshine) Hartman, two sons, Mark Hartman (Beth Brogdon) and Keith Foltz and two daughters, Melissa Jurcy (John Jurcy) and Natalie Foltz. GW is also survived by one sister, Carol Ried and sister-in-law Kaye Malkiewicz, two nieces Kim Smith and Melissa Wolff, a nephew, Jimmy Ried, three grandchildren and four great grandsons. He was preceded in death by his parents, his step-father of many years, Lloyd Edwards, a son Douglas Lamar Foltz, a sister Janet Lynn Dorrough (nee Hartman) and a niece Paula MacFarland (nee Ried). Funeral services will be held on Saturday, April 9th 2022 at 11:00 am at Cox-Knapp Funeral Home in Paxton, IL. Pastor John Hauck from First United Methodist Church in Paxton will officiate the service. Burial will be held at Fairlawn Cemetery in Decatur, IL at 2:00 pm in Section L. Memorials may be made to the American Heart Association or Wounded Warrior Project.

The family of Gerald "GW" Wayne Hartman created this Life Tributes page to make it easy to share your memories.

Send flowers to the Hartman family.