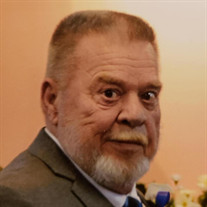 Gerald “Jerry” Houser, 77, of Paxton passed away on Monday, December 7, 2020 at his home surrounded by loved ones. He was born on February 6, 1943 in Piper City, IL, the son of Laurence and Edith (Wilkey) Houser. Jerry married Kathie (Roy) on September 22, 1978 in Paxton and enjoyed a career as a union sheet metal worker. The most important thing to Jerry was his family. Spending time with them brought him much joy. In his free time, he enjoyed fishing, tinkering with computers and flying his plane. He also enjoyed gardening and bowling with his wife, Kathie. He was a HUGE Illini Basketball fan and was very active in the Baptist Church in town before its closure. Jerry, along with Kathie, was a foster parent to more than 40 children over the years, and he also enjoyed his horses and camping when he was younger. He is survived by his wife, Kathie of Paxton; one son, Tom (Traci) Houser of Buckley; 3 daughters, Wendy Marks of Reidsville, NC, Michelle (David) Hood of Paxton, and Erika (Jason) Swan of Noblesville, IN; one brother, Denny (Rita) Houser of Gibson City; one sister, Pat Houser of Alexandria, TN; 10 grandchildren, Josh Shelton, Jacob (Marie) Marks, Brock (Heather) Johnson, Ethan Johnson, Austin (Chrissy) Hood, Dylan Hood, Elijah Swan, Noah Swan, Josiah Swan, Jedidiah Swan; 10 great-grandchildren, Liana, Peyton, Dalila, Izzy, Kendall, Axel, Zandyr, Araya, Jude and Penelope. Jerry was preceded in death by his parents and two brothers, Rick Houser and Paul Houser. There will be a private family service on Friday, December 11, 2020 officiated by long-time friend Pastor Doug Bradley. Burial will follow at Ridgeland Township Cemetery in Thawville, IL. In lieu of flowers, memorials can be made to Gibson City Area Hospital. Please sign his guestbook at www.coxknapp.com.

The family of Gerald "Jerry" Houser created this Life Tributes page to make it easy to share your memories.

Gerald “Jerry” Houser, 77, of Paxton passed away on Monday, December...

Send flowers to the Houser family.