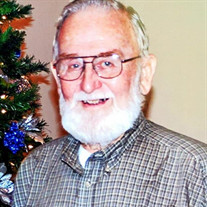 Gerald “Jerry” McClure, 84, of Paxton passed away on Tuesday, April 28, 2020 at Carle Foundation Hospital in Urbana. He was born on July 30, 1935 in Bloomington, the son of Robert John and Minnie Marie (Riecks) McClure. Jerry married Charlotte Sawyer on May 12, 1961 in Urbana. She preceded him in death on October 15, 2011. Jerry was a Driver for K&R Delivery for over 30 years. He was proud to be raised on a farm in the Colfax Anchor area and loved animals and working outside. Jerry played softball for many years and enjoyed reading, Old Westerns, John Wayne movies, and was a fan of the St. Louis Cardinals, Fighting Illini and Chicago Bears. Most of all, Jerry was a proud father and grandfather and enjoyed spending time with his family. He was a member of the United Methodist Church in Paxton and the Loda Sportsmans Club. Jerry was a Veteran of the United States Army and served in the 101st US Airborne. He is survived by three sons Matthew McClure of Saybrook, Mitchell (Elizabeth) McClure of Ohio and Gerald “Tyger” McClure of Paxton; two daughters Leanna McClure (Mark Martin) of Paxton and Carissa McClure (Steve Johnson) of Rockford; eleven grandchildren including Erik Bloomquist (Jennifer Plager), Kayla McClure, Devin McClure (Taylor Butterworth), Teague Dickey (Tierra Tendall), Brenna (Julio) Barradas, Alec McClure (Nova Temple), Connor (Elisabeth) McClure, Mackenzie (Kyle) Smalley, Evan (Bethany) McClure and Tatiyana McClure-Martin; step-granddaughter, Ashlee Martin; eight great-grandchildren; and his faithful Labrador, Trooper. Along with his wife, he was preceded in death by his parents, a sister Norma Lee McClure and two grandchildren Kyra McClure and Elissa Rose McClure. A private funeral service will be held at a later date. Burial will follow at Glen Cemetery in Paxton. Memorials may be made to Ford County Homeless Pets or the Champaign County Humane Society. If you would like to express your condolences by mail, please send to: McClure Family c/o Cox-Knapp Funeral Home 142 W. Patton St. Paxton, IL 60957

The family of Gerald "Jerry" R. McClure created this Life Tributes page to make it easy to share your memories.

Gerald “Jerry” McClure, 84, of Paxton passed away on Tuesday,...

Send flowers to the McClure family.