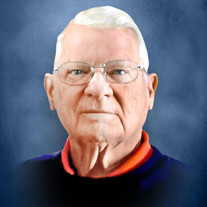 James E. Kingston, age 78, of Paxton, passed away on Tuesday, February 15, 2022. He was born on August 1, 1943 in Paxton, the son of Lewis and Pauline Kingston. Mr. Kingston married Iva Jean (Jeannie) Thompson on January 26, 1961; and she survives in Paxton. Along with his wife, Jeannie, he is survived by a daughter, Laurie (David) Eckerty of Paxton; a son, Greg (Carrie) Kingston of Tolono; three grandchildren, Alaina (Craig) Kief of Paxton, Jamie Kingston of Champaign, and Lewis Kingston of Tolono; two great-grandchildren, Gavin Kief and Kameron Kief of Paxton; and a brother-in-law, John (Cindy) Thompson of Lexington, SC. He was preceded in death by his parents; and a grandson, Wes Eckerty. For 28 years (1977-2005), Mr. Kingston was Mayor of the City of Paxton. He also served Paxton as an Alderman and Police Officer. While Mayor, he served as President on the Illinois Municipal League Board of Directors and served on the Illinois Police Training and Standards Board. Mr. Kingston was also a member of the Paxton Masonic Lodge, Loda Sportsmans Club, and the Loda Post of the Sons of the American Legion. He retired from Ameren on January 1, 2006. A private family burial will be held at Glen Cemetery in Paxton. Memorials may be made to the Evangelical Covenant Church in Paxton. If you would like to extend your sympathy to the family, you may mail cards to: The Kingston Family c/o Cox-Knapp Funeral Home 142 W. Patton St. Paxton, IL 60957

The family of James E. Kingston created this Life Tributes page to make it easy to share your memories.

Send flowers to the Kingston family.