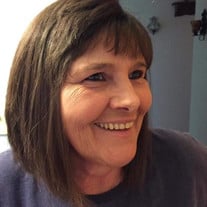 M. Jeanette Deck, 64, of Hoopeston, formerly of Rankin, passed away Friday, June 26, 2020 at her home. She was born on October 26, 1955, the daughter of Marvin and Joan (Cleary) Hofer. Jeanette married Gary Deck on January 24, 1975 in Rankin. She is survived by her husband, Gary Deck of Hoopeston; her father, Marvin Hofer of Rankin; three children, Leon Deck of Hoopeston, Jeremy (Megan) Deck of Hoopeston and Ashley Deck (James Whitaker) of Hoopeston; two brothers, Mike Hofer of Hoopeston and Vern Hofer of Cary, NC; three grandchildren, Brenna (Jacob) Schmid, Colin Deck and Mason Whitaker; and two great-granddaughters, Charlotte and Addison. She was preceded in death by her mother, Joan; maternal grandmother Margaret Cleary; and paternal grandparents Eli and Fern Hofer. Jeannette was a 1973 graduate of Rankin High School and was a resident in Rankin for 38 years before moving to Hoopeston. She tended bar at PJ’s in Rankin for many years. Jeanette enjoyed camping, bowling, and traveling – especially to Indiana Beach and Raccoon Lake – and had a love for hummingbirds. Most importantly, she loved being with her family, grandchildren, and great-grandchildren. Per Jeanette’s wishes, cremation rites have been accorded. A private family service will be held at a later date. Memorials may be made to the American Cancer Society. If you would like to extend your sympathies to the family, please mail cards to: Jeanette Deck Family, c/o Cox-Knapp Funeral Home, 142 W. Patton St., Paxton, IL 60957.

The family of M. Jeanette Deck created this Life Tributes page to make it easy to share your memories.

Send flowers to the Deck family.