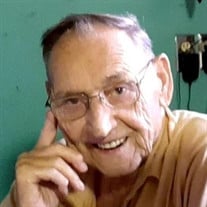 Marvin Hofer, 86, of Rankin passed away on Monday, December 28, 2020 at Accolade Healthcare of Paxton on Pells. He was born on February 24, 1934 in Claytonville, IL the son of Eli and Fern (Boyce) Hofer. Marvin married Margaret Joan Teresa Cleary on September 5, 1953 in Danville, IL. She preceded him in death on October 7, 2009. Marvin worked as an electrician at the Chanute Air Force Base in Rantoul from 1956 to 1989. While working at the base Marvin and Joan also owned the Rankin Bowling Ally for many years. Marvin stayed busy with his own business, Marv’s Electric Service which he served the surrounding towns and especially Rankin. He was a trustee for the Village of Rankin for 18 honorable years as well as serving 2 years on the Rankin School Board. Marvin was a member of the Rankin Lions Club and was on the Rankin Fire Department for 41 years. During his free time Marvin enjoyed bowling, fishing, and spending time at Racoon Lake. Some may know Marvin as the unofficial Town Sherriff as he kept a good eye on Rankin over the years. He is survived by two sons, Vern Hofer of Cary, NC and Mike Hofer of Hoopeston; one brother, Larry Hofer of Rankin; three sisters, Virginia Barr of Rankin, Patricia (Mike) Bushue of Rankin, and Connie (Tom) Cain of Carmel, IN; 8 grandchildren, Jeremy (Megan) Deck of Hoopeston, Ashley Deck of Hoopeston, Leon Deck of Hoopeston, Garrett Hofer of Raleigh, NC, Elizabeth Hofer of Orlando, FL, Jessica Hofer of Hoopeston, Matt Hofer of Illinois and Josh Hofer of California; and several great grandchildren. Marvin is proceeded in death by his parents, his wife, one daughter, Jeanette Deck; two brothers, Duane and Gordy Hofer. A memorial visitation will be Monday, January 4, 2021 from 12:00 p.m. to 1:00 p.m. at Cox- Knapp Funeral Home in Rankin. Memorial Service will follow at 1:00 p.m. at Cox-Knapp Funeral Home in Rankin. Burial will follow at Rankin Union Cemetery. Memorials may be made to Rankin Lions Club or Family Wishes. Please sign his guestbook at www.coxknapp.com

Marvin Hofer, 86, of Rankin passed away on Monday, December 28, 2020 at Accolade Healthcare of Paxton on Pells. He was born on February 24, 1934 in Claytonville, IL the son of Eli and Fern (Boyce) Hofer. Marvin married Margaret Joan Teresa Cleary... View Obituary & Service Information

The family of Marvin Hofer created this Life Tributes page to make it easy to share your memories.

Send flowers to the Hofer family.