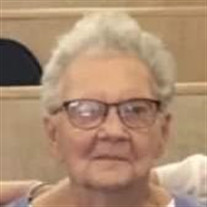 Mary L. Marshall, 97, of Rankin, passed away on Monday, March 29, 2021 at Accolade Healthcare of Paxton Senior Living. She was born on April 16, 1923 in Fargo, ND, the daughter of Frank and Mabel (Hemness) Randich. She married Wayne William Marshall on March 24, 1943 in Sturgis, KY. She is survived by one daughter, Sue (David) Walder of Cissna Park; two sons, Robert (Bethanie) Marshall of Cissna Park, and Ted (Dawn) Marshall of Cave Creek, AZ; one son in law, David Klotzbach of Rossville; 14 grandchildren, Tim, Nicole, Michelle, Justin, Amy, Ryan, April, Brandi, Alexis, Autumn, Mathew, Blake, Stephen, and Dallas; 29 great-grandchildren, and 5 great-great grandchildren. And one special friend, Bev Masters. She was preceded in death by her parents, her husband, one daughter Rebecca Klotzbach; two sisters, Delores and Barbara; one brother, Frank Jr., and one grandson, Dustin Marshall. Mary was a member of Grace Lutheran Church in Rankin, where she served as church secretary for 60 years. While being a member of the church for 76 years, Mary was a part of 13 different ministers serving the church. She was also a member of Rankin Community Council for many years as well as the Senior Citizen Club. Mary loved playing cards with friends. She was a charter member of the Bid n’ Bye Bridge Club for several years. During her free time, Mary enjoyed shopping, sewing, and going out to eat with her family and friends. She adored her grandchildren and all the time she had to visit with them. A memorial visitation will be held on Saturday, October 9, 2021 from 9:00a.m. to 10:30a.m. at Grace Lutheran Church in Rankin. A memorial service will follow the visitation on Saturday and begin at 10:30a.m. Pastor Jennifer Hartweg-Brown officiating. Burial will follow at Rankin Union Cemetery.

Mary L. Marshall, 97, of Rankin, passed away on Monday, March 29, 2021 at Accolade Healthcare of Paxton Senior Living. She was born on April 16, 1923 in Fargo, ND, the daughter of Frank and Mabel (Hemness) Randich. She married Wayne William... View Obituary & Service Information

The family of Mary L. Marshall created this Life Tributes page to make it easy to share your memories.

Send flowers to the Marshall family.