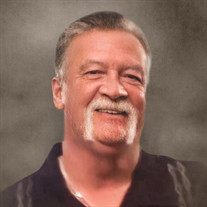 Michael D. Mount, 68, of Champaign, passed away on Thursday, September 16, 2021 at Accolade Healthcare of Paxton. He was born on October 25, 1952 in Lincoln, the son of Harry Mount and Josephine Haynes. Mike married Michelle Hott on February 27, 2012 in Nashville. He is survived by his wife, Michelle Mount of Champaign; five children, Erica (James) Brucker of Melvin, Kristina (Doug) Alberts of Emden, Michael Hott of Urbana, Mark (Paula) Hott of Gibson City, and Matt Hott of Gibson City; two sisters, Crystal Allen, and Tami Turner; seven grandchildren, Kaden, Haylee, Mason, Jade, Leah, James, and Austin; and many close friends who are considered family. He was preceded in death by his parents and one sister. Mike was a proud Veteran of the United States Navy, serving from 1973-1976, on the USS Kitty Hawk. He was a Correctional Officer for 20 years; working at Correctional Centers in Pontiac, Lincoln, and Illinois River. After retirement, Mike worked security at various events. Mike was an avid Steelers, Celtics, Illini and Notre Dame fan. He enjoyed golfing, fishing, hunting, and going shooting at the range. Mike was also a member of the Masons. He will be deeply missed by all who knew and loved him. Cremation rites have been accorded. Visitation will be held on Thursday, September 23, 2021 from 2:00pm until the 5:00pm Memorial Service, at Cox-Knapp Funeral Home in Paxton. Military Honors will be rendered by the Paxton American Legion Post #150. Memorials may be made to the American Cancer Society or to the American Heart Association.

Michael D. Mount, 68, of Champaign, passed away on Thursday, September 16, 2021 at Accolade Healthcare of Paxton. He was born on October 25, 1952 in Lincoln, the son of Harry Mount and Josephine Haynes. Mike married Michelle Hott on February... View Obituary & Service Information

The family of Michael D. Mount created this Life Tributes page to make it easy to share your memories.

Send flowers to the Mount family.