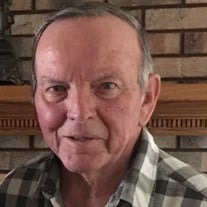 Murle Roy, 79, of Paxton passed away peacefully on Saturday, November 16, 2019 at his home. He was born on August 12, 1940 in Urbana, the son of Thomas Erwin and Dorthy (Wilson) Roy. Murle married Elona Jerosch on July 6, 1963, in Karlstadt, Germany. Murle served in the United States Army during the Berlin Crisis, and was stationed in Kitzingen, Germany. After his time in the service, he worked with Wagner Company to install sanitary sewers throughout Paxton. Later, in 1965, he started his own business, Murle Roy Construction and eventually retired with his son, Ron, taking over the business. Murle was so proud of his developments in town, especially Murle’s East Side Garden Park Subdivision. In his earlier days, Murle enjoyed boating, snowmobiling and building a home in the Northwoods of Wisconsin. He loved to visit his Wisconsin home as frequently as he could. Murle was a former member of the Loda Sportsmans Club and was a Volunteer Firefighter for the Paxton Fire District for many years. He was also a member of American Legion Post #150 and a member of the First Baptist Church of Paxton. Murle was also lovingly known as “Waldo” and “Murle the Squirrel”. He left his mark on the town of Paxton and will be deeply missed. He is survived by his wife Elona Roy of Paxton; one son Ron Roy of Paxton; one daughter Susan (Kevin) Heyen of Paxton; one brother Rex (Linda) Roy; three sisters Karren Bussey, Kathie (Jerry) Houser and Debbie Payne; and two grandchildren Brandon Heyen and Brittany Heyen. He was preceded in death by his parents and three brothers Garrie Roy, Thomas “Wickie” Roy and Dallas “Darwin” Roy. Cremation rites have been accorded. A memorial visitation will be held on Tuesday, November 19, 2019 from 4pm until 7pm at Cox-Knapp Funeral Home in Paxton. Murle’s memorial service will be on Wednesday, November 20, 2019 at 11am, also at Cox-Knapp Funeral Home. Inurnment will follow at Glen Cemetery in Paxton. Memorials may be made to the Parkinson’s Disease Foundation or donor’s choice.

Murle Roy, 79, of Paxton passed away peacefully on Saturday, November 16, 2019 at his home. He was born on August 12, 1940 in Urbana, the son of Thomas Erwin and Dorthy (Wilson) Roy. Murle married Elona Jerosch on July 6, 1963, in Karlstadt,... View Obituary & Service Information

The family of Murle Roy created this Life Tributes page to make it easy to share your memories.

Murle Roy, 79, of Paxton passed away peacefully on Saturday,...

Send flowers to the Roy family.