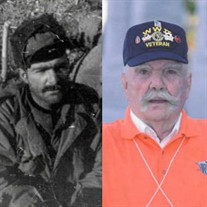 Owen T. Miller, 94, of Paxton passed away on Sunday, March 7, 2021 at Gilman Health Care. He was born on April 16, 1926 in Elliot, IL the son of Charles and Ruth (Harris) Miller. Owen married Betty M. Anderson on December 30, 1950. She preceded him in death in November 2016. He is survived by one son, David (Bonnie) Miller of Mahomet; one daughter, Robin Miller of Paxton; two grandchildren, Alex and Andrew Miller of Mahomet; one sister, Ann Clark of Champaign; and several nieces and nephews. He was preceded in death by his parents, his wife, two sons, Michael and Douglas, three brothers, Lewis Miller, Charles Miller, Leo Miller and three sisters, Jo Storm, Helen Anderson, and Betty Johnson. Owen enjoyed spending time with his family and friends. He was also fond of his bus trips to Peoria. It was always a delight to him to meet his friends for coffee and chatting. Owen served in the Army during World War II and also the Korea War from 1944 to 1966. While during his time in the Army, Owen was stationed all around the world, including places like Fort Carson in Colorado Springs, Fort Polk Louisiana, Camp Atterbury Indiana, Fort Sheridan, Camp Robinson in Arkansas, Camp Kilmer and Fort Dix in New Jersey, Camp Shanks in New York, Fort Knox and Fort Campbell in Kentucky, Fort McCoy in Wisconsin, Camp Milesians in Massachusetts, Fort Leonard Wood in Missouri, and Fort Custer in Michigan. Being in the Army, Owen was able to travel all around the world. Some of those places include, Germany, Ireland, England, France, Switzerland, Belgium, Japan, Korea, Alaska, and Azores. Services will be held at a later date. Cox-Knapp Funeral Home, Paxton, is handling the arrangements. Please sign his guestbook at www.coxknapp.com

The family of Owen Thomas Miller created this Life Tributes page to make it easy to share your memories.

Send flowers to the Miller family.