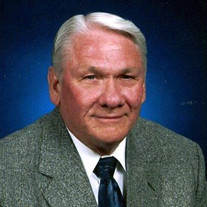 Richard “Dick” E. Hewerdine, age 87, a long-time resident of Paxton, passed away on Friday, November 5, 2021, in Corpus Christi, TX. He was born on September 17, 1934 in Ludlow, the son of Ray and Irene (Huguet) Hewerdine. Dick married Joyce Ann (Dunlap) Hewerdine on November 26, 1960. She preceded him in death on March 3, 2015. Dick was a Veteran of the United States Army. He was the Owner/Operator of Hewerdine Coin & Jewelry for more than three decades; and was also a member of the Ford County Board for more than thirty years. Dick enjoyed telling jokes, bowling, playing golf, and watching sports – his favorite teams being Chicago Cubs, Chicago Bears and University of Illinois basketball and football. He also enjoyed reading and watching westerns. He is survived by two sons, Craig (Kimberly) Hewerdine of Corpus Christi, TX and Jason Hewerdine of Richmond, TX; two grandchildren, Carter Hewerdine and Elizabeth-Ann Hewerdine; one brother, James (Theresa) Hewerdine of Paxton; one sister, Margaret (Donald) Kissaw of Mansfield; three sisters-in-law, Erma Hewerdine of Loda, Rosemary Hewerdine of Rantoul, and Janet Hewerdine of Olney; and many nieces, nephews, and close friends. Along with his wife, Dick was preceded in death by his parents; four brothers, Robert Hewerdine, William Hewerdine, Donald Hewerdine, and Michael Hewerdine; and one sister-in-law, Kathleen Hewerdine. Cremation rites have been accorded. A Memorial Mass will be held on Saturday, November 27, 2021 at 10:00 a.m., at St. Mary’s Catholic Church in Paxton, with Fr. Dong van Bui officiating. A reception will follow at the St. Mary/Joseph’s Parish Center. A burial will be held at Ludlow Cemetery following the reception for those who wish to attend. Memorials may be made to Paxton PRIDE. Services have been entrusted to Cox-Knapp Funeral Home in Paxton.

The family of Richard E. Hewerdine created this Life Tributes page to make it easy to share your memories.

Send flowers to the Hewerdine family.