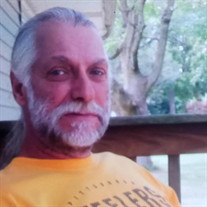 Scott Benninger Sr, age 58, of Paxton, passed away on Thursday, April 7, 2022, at Carle Foundation Hospital in Urbana. He was born on August 22, 1963, in Corry, Pennsylvania, the son of Donald and Eva (Cox) Benninger. Scott married Tami Shinker on February 9, 2005. Scott is survived by his mother, Eva Benninger of Corry, PA; his wife, Tami Benninger of Paxton; two children, Scott Benninger Jr of Gibson City and Angel Benninger of Melvin; a step-son, Cody Shinker of Champaign; two sisters, Brenda Teslaw of Pennsylvania and Danielle Morton of Corry, PA; and five grandchildren, Brooklyn, Scott, Brody, Gavyn, and Emma. He was preceded in death by his father, Donald Benninger. Scott worked at the Ludlow Co-Op Grain Elevator in Paxton for 22 years. He was a die-hard Pittsburgh Steelers fan and enjoyed fishing, camping, and gardening. Most importantly, Scott loved spending time with his wife, children, and grandchildren, and adored his dog, Wookie. Cremation rites have been accorded. A memorial visitation will be held on Thursday, April 14, 2022, from 4:00 pm – 7:00 pm, at Cox-Knapp Funeral Home in Paxton (142 W. Patton St.). Memorials may be made to the American Cancer Society.

The family of Scott Benninger Sr. created this Life Tributes page to make it easy to share your memories.

Scott Benninger Sr, age 58, of Paxton, passed away on Thursday,...

Send flowers to the Benninger family.